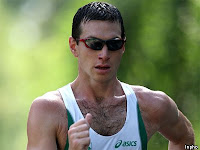 Jamie Costin finished an honourable 44th in the men’s 50k with a time of 4:15.16. Four years ago, Costin didn’t even make the start after a serious car accident while training. It took years of rehabilitation before he could even walk normally again.
At the finish, Costin required medical attention after his efforts. Of the 59 starters, seven dropped out while a further five were disqualified including Colin Griffin. He was lying 37th, not far ahead of Cosin, after 15km, when he was pulled out.
Winner of the race was Alex Schwazer (Ita) who set a new Olympic record of 3:37.09. Of the top 16, exactly half improved their personal best times, despite conditions that started cool enough at 19 degrees but got steadily hotter and more humid and had even spectators diving for cover.
“It has been a tough and winding road for me to get here,” Costin told Frank Greally of the Irish Runner magazine. “I know my placing is not good enough, but it was really important for me to finish this Olympic event. “I was really tired at 38 kilometres and the final twelve kilometres were very tough.”
“No matter what happened out there, I knew that I had to finish the course,” Costin said. “My family are here and it has been eight years since I last competed in an Olympic Games, so I wanted to make the best of my chance here in Beijing.”
Posted by Lindie Naughton at 11:14 AM