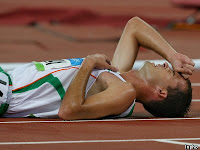 Alistair Cragg finished a fighting sixth in the first heat of the men's 5000m, but his time of 13:38.57 was sixth fastest overall and enough to see him comfortably through to the final. The humid conditions obviously took their toll on all the runners, with Cragg's time faster than the winning time in two other heats.
In the men's 800m, Thomas Chamney was extremely unlucky not to make the next round after finishing fifth in the first of eight heats with a time of 1:47.88. Just two from each heat along with eight fastest losers went through.
A few athletics facts from these Games: of the 204 nations competing in Beijing, 201 have at least one athlete competing (53 African nations are competing, along with 49 European, 42 from the Americas, 42 from Asia and 15 from Oceania) . Only 104 countries competed in the swimming. The most popular event on the track and field calendar is the 100m, with 165 entries; by comparison, the entire sport of beach volleyball has 96.
It took Carl Lewis FOUR Olympiads to win his eight medals; Phelps could do it in one.
Posted by Lindie Naughton at 4:56 PM