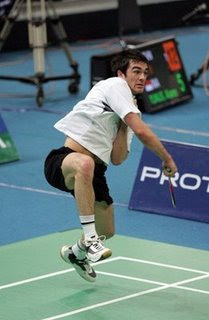 At 19-all in the third set, Irish badminton fans were starting to believe that their man could make it past the dangerous German Marc Zwiebler, ranked 23 in the world compared to Scott's 46.
Almost in the blink of an eye it was over, with Zwiebler sinking to his keens in relief and the score at 21-18, 18-21, 21-19.
The match was that close and Evans, at the age of 20, four years younger than his opponent, proved that he can hold his own with anyone. Zwiebler won the first set, but only after Evans had briefly led.
This was enough to boost the Irishman's confidence and he went into the next set all guns blazing. It was still nip and tuck all the way - 6-all, 7-all, then 10-all, 16 all, and 18 all. A tremendous shot to the baseline gave Scott the 20-18 lead and from that he closed out the set.
Into the third and Evans, always a confidence player, was still on a high, though tempering his urge to smash everything with the caution advised by coach Jim Laugerson. From the stands, big brother Lee (with whom Scott won an Irish doubles title a few years ago) and father Martin were leading the chanting in Scott's support. Even the knowledgeable Chinese were clearly enjoying the match.
Again the third set was agonisingly close, though this time, it was Evans forcing his opponent to play catch-up. He led at 3-2, 4-3, then 7-4 and 8-6 and was forcing the German to hit the deck more than once in vain pursuit of a shot.Particularly effective for the young Dubliner were cross court smashes to Zwiebler's right - difficult for a leftie to pick up. These won him the point at 14-all and 15-14, while a fine net kill saw him pull away at 18-15. But the German had the experience to wait his moment. Evans made a few mistakes, the German drew level, and then it was all over.
A great match; Scott can be proud. London 2012 is calling!

* Also out is the young fencer Siobhan Byrne, who was competing in the first ever women's sabre competition held at an Olympics. Byrne, Ireland's first female Olympic fencer since the days of "Tommy" Dermody and Shirley Duffy, was beaten 15-8 by Irena Wieckowska of Poland.
* Trap shooter Derek Burnett's chances of reaching the final six appear slim after he ended the first qualification event in 15th place.Burnett hit 69 of the 75 targets. Even a perfect score in Sunday's remaining two rounds may not be enough.
* Kenneth Egan had an easy 22-2 victory over Julius Jackson of the Virgin Islands in the light-heavyweight preliminary round.
Posted by Lindie Naughton at 9:38 AM