Badminton: Magee through to second round 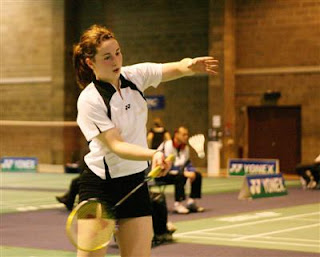 "It was a real rollercoaster ride today at the Beijing University of Technology Gymnasium for Irish badminton and the entire day provided more excitement, passion and skill than one could hope for in any badminton session.

Undoubtedly the performance of the day was that of the "Raphoe Legend" who produced an exceptional display to win her first round tie against Kati Tolmoff of Estonia.

Chloe started well and took an early lead but playing with the drift she couldn't stop the Estonian for changing the pace and angle and forced Magee in to some errors allowinhg Kati to forge ahend. This lead was held by the Estonian throughout the entire first set despite Chloe pushing her all the way. First set Estonia 18-21. The second set followed a similar patter with Kati leading at the interval but she could not shake off the tenacious Magee and despite some huge rallies, Chloe narrowed the gap. This clearly put huge pressure on Tolmoff who made some uncharacteristic errors allowing Chloe to regain the lead late on in the set showing some remarkable defence and all the usual aggressiveness we come to expect fro Chloe. Second set Magee 21-18.

The third set was another battle with Tolmoff taking a 3 point interval lead but Chloe was going to finish on the good side and despite some nervey moments, Magee took 5 points in a row to secure Ireland's first badminton Olympic win 21-19. It was a fantastic achievement.

We wish her well."
Posted by Lindie Naughton at 7:07 PM