For journalists, a week and a half in the Olympic bubble clearly causes a certain amount of giddiness.
On the BBC breakfast show , a chap called Adrian proposes that Amy Winehouse be the face of the 2012 Olympics. He has a point – Winehouse is probably closer to the typical Brit than Paula Radcliffe or all those cyclists who seem happy to spend their days living like hamsters in a cage.
Then in the Irish Times, our old pal Iano shows clear signs of having spent too much time in the Beijing boot camp with an article of heavy-handed satire (we think).
“ When an athlete steps on to the track at the Olympics it's not simply show time. It's something they've worked towards for years; it's life-defining as, with the whole world watching, their Neil Armstrong moment arrives. Yesterday, David Gillick didn't even step out of the spaceship.
One small step back for Gillick.
One giant leap backward for Irish athletics.”
Bloody hell – we thought David Gillick was just a talented 400m runner, the best we’ve ever had, but one for whom making even the semi-finals of an Olympics would be a huge

ask. He trains with Martin Rooney after all – and the Brit born of Irish parents is a second faster than him.
Iano moves on to voice what he thinks are the opinions of the TV-watching public back home.
“ So all our athletes are crap. We deserve better than this. This is taxpayers' money. We want to see finalists or personal bests and maybe even some medals.”
Gillick’s “failure” he says (on behalf of the Irish public), deserves some hard questioning. Really? I would have thought the Irish public just says “hard luck” and moves on to its real concerns – the All Ireland and the Premiership.
“ It doesn't matter that he's won two European Indoor titles for Ireland. That he left his family and friends to base himself at Loughborough University in England, because the facilities and coaching simply aren't available in Ireland. That he's put four years work into getting it right at the Olympics, only to see it go inexplicably wrong,” says Iano.
Then there’s Derval O’Rourke - another “failure”.
H’mm. How about this for a theory. Both Gillick and O’Rourke moved away from home, from the “inadequate” training facilities and “below-par” coaching that had brought them considerable success and allowed them to go full-time.
Maybe they would have been better staying put among their friends, with family support and coaches who knew and understood them, rather than travelling to the UK, where they were very small fry in a big pond. When you’re away from home, the long hours between training sessions can become a huge burden.
Iano then turns his – we hope – satirical eye on our distance runners. Where have all our distance runners gone, he asks. Róisín McGettigan made the final of the steeplechase and bombed, he says. 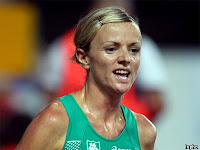 Oh yeh? Roisin was in a race where the pace was set by a couple of very suspect Russians. Possibly she got her tactics wrong, but we are not going to make matters worse for a very brave athlete by slamming her performance.
“Why aren't more athletes coming through the US scholarship system anymore, like Delany, Murphy, Coghlan, Treacy, O'Sullivan, O'Mara, Sonia, etc?” he then asks. We all know why – distance running is something you do for “fun” these days; there is no point in white guys and gals even attempting to stay with the Africans. At least that’s how it seems.
Finally the paragraph that provoked me into writing this:
“We've pretty much agreed by now that Alistair Cragg is a loser, but then he's not really one of ours anyway, and Pauline Curley was practically an embarrassment in the women's marathon - even if she epitomised the last remnants of the Olympic spirit."
Cragg – a loser? The chap has had an extraordinarily difficult passage through life. You wouldn’t wish it on anyone. He needs our support – not criticism, even in the form of heavy handed sarcasm.
As for Pauline, she has been the high point of the Irish Olympic effort, representing us ordinary sloggers who still go out for a run most days and line up against her every weekend. She has set a wonderful example by her dignity, grace and humility.
Iano we suspect knows this. Here is the following paragraph, where his anger and frustration is (at last) obvious:
“Who wants to see a 39-year-old amateur finishing the marathon when we have Michael Phelps chasing eight gold medals in the Water Cube, all carefully orchestrated for NBC and their 2,000 broadcasters in Beijing (only one of whom, by the way, is staying on for the Paralympics)?
Iano – we know your heart is in the right place, but we get the feeling members of the bruised and battered Irish team in Beijing may need convincing.
Good luck for the remaining few days in the Beijing Babble-on - and stay out of that smog!
Posted by Lindie Naughton at 11:52 AM