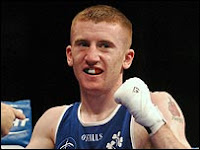 Belfast's Paddy Barnes has won Ireland’s first medal of these Olympics after beating Lukasck Maszczyk 11-5 in today's light flyweight quarter-final.
The win guarantees Barnes at least a bronze medal. He faces a tough task against home favourite Zou Shiming in Friday's semi-finals (12pm).
Barnes is the lightest member of the Irish team; team captain Kenneth Egan, a light heavyweight (81kg) from the Neilstown club in Clondalkin, Dublin, is the heaviest.
A few hours later, he followed Barnes into the semi-finals with a clinical 8-0 demolition of the Brazilian Was

hington Silva. Even a non-boxing fan couldn't fail to be impressed by his performance - Egan is the best Irish boxer for years, with eight Irish and four European titles to his credit, and his pure class was obvious.
He clearly has great support - watching on the television, you could hear the Irish fans - cheering every move, singing 'The Fields of Athenry" and then counting down the final seconds - "five, four , three , two, ONE....!!" Magic stuff.
Add to that the excellent commentary by Jimmy Magee in Beijing and the expert analysis by Mick Dowling in the studio, and boxing is playing a blinder at these Games.
Egan now fights Tony Jeffries (GBR) in the first semi-final on Friday (14.01 our time)
In action at the same time as Egan was Paul Hession in the first semi-final of the 200m. He finished a brave fifth in a time of 20.38 - a bit slower than in the previous rounds, but then running three top class level races in two days is a big ask. He did us proud.
Posted by Lindie Naughton at 1:32 PM

Absolutely fantastic performances by both Barnes and Egan.

I teach in the part of north Belfast where Paddy comes from and know that from the ages of eight the boys are queueing up to join the boxing clubs in the area.

Not many people's cup of tea, but the clubs are well run and the boys learn a lot regarding self-discipline and respect, never mind gaining opportunities to further sporting interests.

The Holy Family club that 'produced' Barnes has now been responsible for (I think) six Irish Olympic medallists.

That's an astonishing success story, given that we've only had some 20-something Olympic medals as a Nation.

But then I'm sure you knew a lot of that already, Lindie....

Anyway, keep it up!

Thanks Chris - know little of Paddy (or very little anyway) but maybe we should write a chapter on the Holy Family club in the next edition of he book.
Egan to me is pure class - and I am not a great boxing fan (despite knowing Mick D well through athletics and respecting what he does).
Delighted that like in Barcelona (the only Olympics I have attended) we will again have at least one Dub and one Belfast lad winning a medal. I hope this time the city fathers in Belfast will give due honour to Paddy.

I certainly hope so re Belfast City Council.

I think I am confusing the Holy Family club's medal tally for the Olympics with the Commonwealth Games- me bad. I note in today's papers Paddy is their second medallists (Hugh Russell being their first.)

Great fight by Sutherland - all getting a bit hard to take in. Roll on Friday!