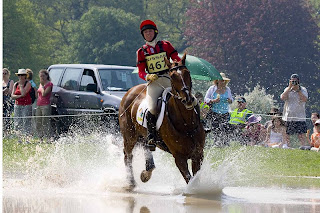 FOUR clear rounds from Irish riders on the cross-country at Hong Kong has left the Irish eventing team in overnight eighth position on a total score of 265.10, moving up two places.
All riders incurred just time penalties, with only Niall Griffin and 'Lorgaine' picking up an extra 20 jumping penalties.

" It's a long time since an Irish team had four clear rounds on cross-country, so when it came to Niall we already had the team score in the bag. We told him just to go for broke and ride for speed. Unfortunately he had a run-out on a corner at the back end of the course, and that's where he picked up his 20 penalties," said coach Ginny Elliott.

" I'm a lot happier with our performance today. It's been a marvellous team effort from not just the riders, but the vets, grooms and all the Irish back-up staff. Now we have tomorrow to look forward to, and tomorrow is another day."

The eventers complete their Olympic effort on Tuesday, with the show jumping element. Germany leads the overnight rankings on 158.10 penalties, with Australia on 162.00.