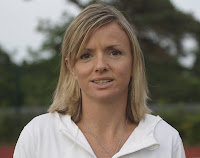 Roisin McGettigan has qualified for Sunday's final of the women's steeplechase (2.30pm) after finishing second in the second of two qualifiers in 9:28.92.

With two laps to go, she moved away from the chasing pack along with Tatiana Petrova of Russia and Jessica Augusto of Portugal. In the sprint for the line Petrova narrowly made it home first in 9:28.25. McGettigan's time puts her 13th of the 15 to have made the final.

In the first heat, Fionnuala Britton finished tenth in a season's best time of 9:43.57.

Alastair Cragg finished eighth in heat 2 of the men's 1500m opening round , with a time of 3:44.90 less than four seconds behind the winner Asbel Kipruto Kiprop.

Posted by Lindie Naughton at 5:04 PM