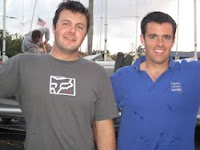 Star fleet sailors Peter O'Leary (Cork) and Stephen Milne (Bangor) have finished 13th in the Olympic regatta after only a year campaigning together.
On an exciting day in Qingdao, O'Leary and Milne produced their fourth top ten result in the Star class placing 8th in their first race of the day. Because of all the delays, racing had started early so that the Opening Series could be concluded in time. The Irish pair finished 11th and 12th in races 9 and 10.
Counting four top ten race finishes in their first Olympic Regatta this young pair - both aged 22 and a controversial choice for the team after Max Treacey and Anthony Shanks won Ireland the place - can now look forward to London 2012. There the Olympic Sailing Regatta will take place in Weymouth in conditions very similar to home waters. The experience O’Leary and Milne have gained in Qingdao will stand to them.
In the Opening Series overall, O'Leary and Milne counted 6th, 12th, 7th, 10th, 12th, 13th, 8th, 11th, 12th and discarded a 13th.
Posted by Lindie Naughton at 10:47 AM