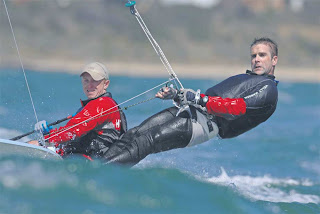 Ger Owens & Phil Lawton have won race 5 in the 470 double handed men’s dinghy class - the second race win for the pair in the opening series. They are now placed 11th overall when they discard their 25th from race six.
Only the top ten boats will compete in the Final Medal Race. Owens & Lawton on 56 points lie just three points behind New Zealand in 10th place. Australia's Nathan Wilmot & Malcolm Page lead the fleet on 24 points.
The light winds of Qingdao faded completely today and for the first time the event organisers were unable to complete the day's racing schedule.
Following a rest day, the Finn class resumed, with Tim Goodbody 22nd in Race 7 ; race 8 is now scheduled for tomorrow (Thu). Goodbody lies in 22nd with 98 points.
In the Laser Radial, Ciara Peelo was 15th in Race 3; race 4 is also rescheduled for tomorrow. She lies 23rd on 55 points.
“Olympic competition is very different to a world championship. Here the fleets are so much smaller that when you lose one or two places you lose a much bigger percentage of your overall result, ” says James O’Callaghan ISA Performance Director in Qingdao
“The mark roundings and finishes are very close. Normally a fleet would be spread out but all boats appear to be finishing within a minute or two of the leaders. Today Ger & Phil won their race just six seconds ahead of the fleet – it’s that close.”
Posted by Lindie Naughton at 12:16 PM