Showjumping: Lynch Through to Final 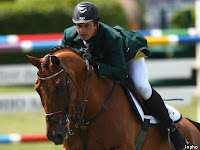 Denis Lynch, riding the great Lantinus, today posted his worst result of the equestrian event so far, but still almost certainly did enough to qualify for the final of the individual show-jumping competition.

Lynch, who was off 13th and ranked equal fourth before this third qualifying round, hit the tape on the water jump for four faults and also picked up two time faults.

With a total of eight faults over three rounds, he lies in a comfortable eighth position, just one place behind defending champion Rodrigo Pessoa of Brazil. While the individual table could be altered by the team competition, starting today, Lynch's place in the final looks safe.

"It was another top class performance from Denis Lynch. He disturbed no poles and Lantinus's touch of the tape on the water jump was uncharacteristic - and as a similar technicality may well come up on the final course, Denis will know not to under-ride it. It is something that is easily rectified. This is a step-by-step process, and I think Denis is handling it brilliantly," said Irish team manager Robert Splaine.

Posted by Lindie Naughton at 5:13 PM