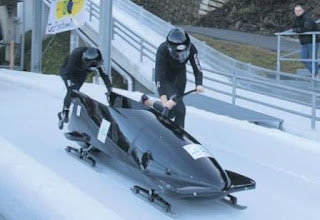 The Irish two-woman bobsleigh team of Aoife Hoey, Claire Bergin and Leona Byrne are two races away from qualifying for February's Winter Olympics in Vancouver.

For Hoey, the prospect of qualification is the culmination of a voyage that started 10 years ago. Her past two attempts at qualifying ended in heartbreak, with Ireland finishing 16th ( 15 teams qualifying) both times in a sport where the major nations are allowed to send two teams.

Currently, Team Ireland sits 20th, and since the International Olympic Committee have extended the competition to include 20 teams, Hoey and team-mates are on the brink of making it. "We're in the last qualifying spot and, at the moment, our place is secure. We have two races left to count and the margin is a tiny bit too large for the trailing teams to catch up," says Hoey.

"We'll have to finish fairly well to make sure of it, but I'm fairly confident on the next two tracks -- Germany and Switzerland. I don't want to count my chickens before they've hatched, but I think we'll sneak in. I think we've done phenomenally well based on the amount of effort and time, considering we are a very small team."

That small team comprises driver Hoey, who is 26 and from Portarlington, and her break-women: 24-year-old Dubliner Bergin and Byrne, who is 22 and from Carlow.

Hoey's sister Siobhain, a former competitor, manages the team and will be Irish chef de mission in Vancouver. Aoife followed her sister into a sport that didn't come naturally to the then Irish teenager.

"Siobhain was one of the first women to compete in bobsled for Ireland," she explains. "She knew the men's team at the time eight years ago when there were national trials held at Morton Stadium in Santry. She had excelled in the trials, as from a triple-jump background, she was fast, explosive and powerful.

"She came home after being on the circuit for year and told me about how great it was, how tough it was; and from listening to the stories, I wanted to take part myself and I did the trials the following year. I was only 16.

"I had to wait until I was 18 for insurance reasons before I was allowed to slide, but I became a break-woman for two, three years behind another pilot. When she retired, I decided I'd have to learn to drive and Siobhain became my break-woman."

Training at Santry gave her a slight taste of what she was getting into, but she only realised the true enormity of the sport when she was at the top of the run for the first time. "I'd heard stories about what bobsledding was like, but until you're actually up there you don't realise how fast it actually is."

"There's a huge fear element. When I was standing at the top of the run, everything seemed doom and gloom. The weather was very cold - it could be minus-30 degrees, windy and icy - and I had no idea what to expect. I had been told about G-force: some tracks experience four or five Gs. Astronauts might get that sort of force, and the pressure in bends and the speed are unprecedented.

"Adrenalin is hugely important, but you have to have an element of fear because you're responsible for your break-athlete in the back. You welcome that little bit of fear, so that I do the sensible thing when I'm on the way down."

The team, all still comepting as athletes in the summer, are known for their fast starts on the bobsledding circuit. The IOC have helped by purchasing a state-of-the-art sled, but given the minority status of the sport in Ireland, they've been leaning on friends, family and employers for help. Hoey works for the Athletics Association of Ireland.

"It's such a hard sport and we rely on friends and family to support us. My own family has travelled to events - my brother has even helped with pushing the sled. It weighs 300kg and you're talking about three girls heading out in a van maybe nine or 10 hours from one track to another, lifting, moving, dragging a sled and all for a run that takes maybe 30 seconds.

"It might take four or five hours of training in one day with 50 or 60 sleds going down in a session; it means it's very intense with a huge amount of work to be done.

"The sled has to be prepared every evening after sliding. Polishing them with sandpaper can take four or five hours every evening. The better your materials, the faster you'll be coming down the ice."

Stronger bobsledding countries offer plenty of assistance to their Irish rivals. "The other nations have been really helpful to us. Everyone is in complete awe of us because we compete with the best in the world: we're very, very good on the starts. My driving has improved immensely and I think even in four or five years' time, you could be looking at a top-10 finish, rather than a top-20."

Posted by Lindie Naughton at 10:41 AM