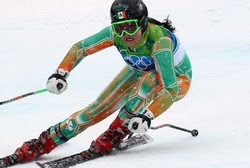 Ireland's Kirsten McGarry finished 50th of 60 competitors in the women’s giant slalom at a foggy Whistler Creekside track. She improved her overnight position by five places with a much improved run of 1:20.92 (9.55 secs slower than the winner. In her firsts run McGarry was placed 55th with a time of 1:24.28 (9.16 secs behind the winner). Her combined time of 2:45.20 put her 18 seconds behind the surprise winner Viktoria Rebensburg of Germany. Eight skiers crashed out of the competition.
* A day later, McGarry's Winter Olympics ended on a sour note when she was disqualified from the slalom after one of her skis was judged to be one millimetre too thick.

Despite the foggy conditions, she had completed her first run in a time of 59.28 seconds, but the judges' ruling means no participation in the second run.

Posted by Lindie Naughton at 9:28 AM