Irish men’s No 1 Scott Evans has drawn reigning world and Olympic champion Lin Dan of China for his opening group match  in the men’s badminton singles, at London 2012.

The  draw could not have been tougher for  Evans, world ranked No  76. Lin, although seeded second to Malaysia's Lee Chong Wei for the tournament,  is widely regarded as the greatest player of all time.  Evans has played Li many times,  most notably in the second round of last year’s World Championships at Wembley, where he put up a good fight.

Chloe Magee, world No 44,  has had a much kinder draw in a group of three. The toughest of her two opponants is 33-year-old Pi Hongyan of France, a quarter-finalist at Beijing in 2008, now world ranked 25.
The pair met in the quarter finals of the Yonex Irish Open in Lisburn last December with Pi only winning after three hard-fought sets. 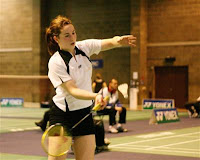 The other player in the group is Egypt’s Hadia Hosny, world ranked 113 and African No 1. Magee had the chance of analysing the Egyptian's  play at a Pre-Games camp held in the  National Training Centre in Dublin; the pair face each other on Sunday.

Only the winners of the 16 groups in the singles competitions, some with two players and some with three,  will go through to the knockout stages of the competition.