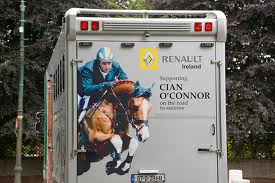 Cian O'Connor riding Blue Loyd will take the place of Denis Lynch on the Irish equestrian team for London 2012.
He joins Billy Twomey, one of the two individual showjumpers originally selected.
The pair begin their competition at  Greenwich, London,  on August 5.
* Names as first reserve to the pair is Florida-based Shane Sweetnam and Amaretto Darco.  Sweetnam, from Cork, has been a regular member of Ireland's Nations' Cup teams over the last two years. With Spy Coast Farm's stallion Amaretto Darco he has had notable successes on both the European and American circuits.
Posted by Lindie Naughton at 5:41 PM