* Flyweight Michael Conlan outclassed by the brilliant Cuban Robeisey.
*On the track, a bad evening for anyone who thinks athletics is clean,  with the winning US 4x100 team, including the very suspect Jeter breaking an East German world record and a Turkish cheat winning the 1500m. In the field events, another athlete who had served time for doping won the hammer.
* Brave effort by the 4x400m quartet of Marian Heffernan, Joanne Cuddihy, Jessie Barr and Michelle Carey. They finished 6th in a season's best time  3:30.55. Special mention for Claire Bergin, who gave her place to Jessie Barr.
* Silver at least for boxer John Joe Nevin who beat the world champion  Lazare Alvarez Estrada of Cuba comfortably in the 56kg semi-final. He fights Team GB's Luke Campbell in tomorrow's final.
*Great boxing from superfly Paddy Barnes,  only losing on countback after dominating the final round of his fight with the world No 1.
* Today's Jimmy Magee quote: "He's had his future, he's had his present, he's had his past. He's all three tenses rolled into one." (on JJ Nevin)

* Andrej Jezierski was second in his heat of the C1 200m, and then fourth in the second semi-final.  With the top two from three semi-finals and two fastest 3rd places going through, Jezierski didn't make it. Had it been fastest losers, he would have. Competes in tomorrow's B final, which he is favourite to win. 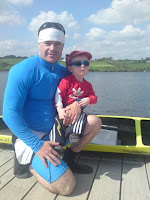