Barr Goes under 48 seconds and just misses out on medal 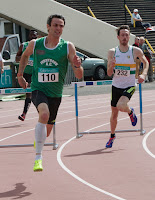 Thomas Barr of Ferrybank smashed his own Irish record when he finished fourth in the 400m hurdles final in 47.97 secs.
Barr was back in about fifth place coming into the finish, but "kicked like an absolute animal "to claw his way to fourth place, with only quarter of a second separating the top four. At the age of 24, Barr will be the one to watch at next year's World Championships.
"If it had been a 405m race, maybe I could have sneaked it!", he said after.

FINISHING  40th in the triathlon was Bryan Keane in a time of  1hrs 52 mins 09 secs. Keane was 38th out of the water and in the first chase pack, but fell back on the cycle, heading off on the run in 45th place. He had pulled himself up to 43rd place after the first of four laps and continued to improve. Up front, Britain's Alastair Brownlee successfully defended the title he won in London four years ago. His younger brother Jonathan was second - up from bronze four years ago.
Posted by Lindie Naughton at 4:18 PM