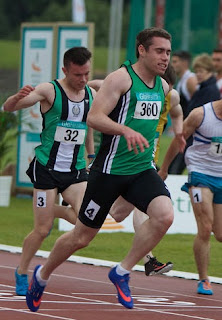 Jason Smyth has stormed to a third successive 100m T13 title in Rio in a time of 10.46 secs. Second was the Namibian Johannes Nambala in 10.78 with Australian Chad Perris third in 10.83. It was a fifth Paralympian gold for Smyth.

In the Aquatics Centre, 14-year-old Nicole Turner from Laois qualified for the S6 50m Butterfly final on her Paralympic Games debut.  Turner finished second in her heat in 38.44 seconds to advance in 4th place overall. In cycling, the tandem pairing of Katie-George Dunlevy and Eve McCrystal finished 7th in the WB Tandem Kilo in 1.12.332

In the men’s individual pursuit qualification rounds, Colin Lynch finished 5th in3.53.300 - not enough to see him through to the medal races.A fourth place for Eoghan Clifford  will see him race Sametz of Canada for the bronze medal. Table tennis player  Rena McCarron Rooney lost out to China's  Jing Liu  Jing Liu  11-9, 11-4, 11-2in hr opening Group B match.
Posted by Lindie Naughton at 8:43 AM